European Media provides a clear, concise account of the structures, dynamics and realities of the changing face of media in Europe. It offers a timely and illuminating appraisal of the issues surrounding the development of new media in Europe and explores debates about the role of the media in the formation of a European public sphere and a European identity.

The book argues that Europe offers an ideal context for examining interactions between global, regional and national media processes and its individual chapters consider: the changing structure of the European media; the development of new media; the Europeanization of the media in the region; the challenges for the content; and audiences. Special emphasis is given to the transformation of political communication in Europe and the alleged emergence of a European public sphere and identity.

European Media: Structures, Politics and Identity is an invaluable text for courses on media and international studies as well as courses dealing with European and national policy studies. It is also helpful to students, researchers and professionals in the media sector since it combines hard facts with theoretical insight.

An excellent overview and reference on some of the big shifts that characterise the evolving media scene in Europe.'
LSE Review of Books

'Commendable for its breadth and wealth of information. Fulfilling their laudable and ambitious aim to provide a synthesis of the development of the European media, a European public sphere and European identity, the authors offer a succinct historical account of the structures and dynamics of the media in Europe and an excellent overview of debates and academic research on the emergence of a European public sphere and European identity.'
European Journal of Communication

'Throughout the book the authors skillfully synthesize the main policy developments, supporting facts and figures drawn from market research, and audience research data, with relevant and up-to-date academic literature. Unlike some examinations of the EU, the book gives an objective account without making any ideological assumptions about the extent to which the EU and its involvement in the media and communications industries is a good or bad thing.'
Journalism Practice

'By focusing on the EU as a complex, transnational political entity, the authors go a step beyond the current state of the research on this topic. Indeed, their work signals whether, in the future, it would be adequate to analyze any national media system without taking the EU framework into account.'
Television and New Media

"This is a useful pan-European view of how the processes of globalism, the integration of member states and the rapid development of new technology impact on the EU's intentions in all aspects of communication."
Media International Australia

'This book is about the important challenge that faces European citizens today: Is a process of Europeanization possible? Do European media exist? More precisely, can they exist? Assuming "that Europe continues to offer the best place for examining global media processes", Papathanassopoulos and Negrine discuss in depth the homogenization process, offering evidence and data as to the structure of the European media systems, the role of new technologies and the policies that the European Union is implementing to facilitate the integration process. An indispensable book for all those who are interested in knowing where the European mass media are going.'
Paolo Mancini,
Universita di Perugia

'Two veteran watchers of the evolving European media landscape have put together a comprehensive and coherent account succinctly and clearly. It is especially strong in historical and political economic sense, but above all informative, relevant and as up to date as can ever be achieved at one moment. Strongly recommended as a text.'
Dennis McQuail, Emeritus Professor,
University of Amsterdam

'When two distinguished professors from different poles of the continent combine to produce a study of European media then the prospects are inviting. The product here amply fulfills the promise, Stylianos Papathanassopoulos and Ralph Negrine bringing to readers deep knowledge of similarities and differences across European nations as well as an understanding of common problems and opportunities. Above all, Europe matters in the globalizing world we inhabit, and this book reveals how and why.'
Frank Webster,
City University, London 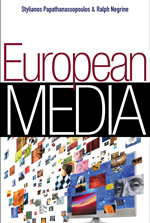