Media and Politics: the case of Southern Europe

This book attempts to analyse the development of the mass media in the European South, particularly the media systems of Italy, Spain, Portugal and Greece as well as to relate their development to the political history and particularities of these countries.

Although, this study is not a detailed history of the developments in the filed of mass communication in the Southern Europe, it tries through a historical oriented comparative analysis to identify the common characteristics as well as certain constant features of the media systems in these countries. It focuses on the way that the social, political and financial conditions as well as the historical particularities have influenced the growth, the structure and the functioning of the media in the European South.

It also examines the structure of media markets, the relationships between the media and the political parties, the interplay between media owners and political power centres and the battle for control of the public agenda as well as the limited development of journalism as an autonomous profession. 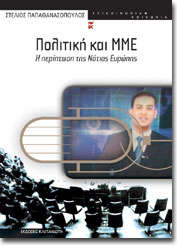