European Television in the Digital Age; Issues, Dynamics and Realties

European Television in the Digital Age traces the development of digital television and provides a clear, concise account of the dynamics and realities of the changing face of television in Europe. The book synthesizes an array of empirical research and case study work, summarizes theoretical arguments, and provides an up-to-date analysis of the European audiovisual landscape. The author offers a timely appraisal of the key issues surrounding digital television in Europe today and outlines the likely future trends.

Papathanassopoulos considers the problems associated with the new digital developments in Western Europe, the effects of the deregulation of European television, the economies of the new era and the issue of consolidation in the media industries. He also examines the future of public broadcasters, the role of the European Union and the impact of television in political communication. Special emphasis is given to the emergence and the effect of thematic channels, particularly on news, sports, music and children's programming.

European Television in the Digital Age is an invaluable textbook for students on courses in media and communication, European studies and national policy studies. It will also be a useful source for researchers and professionals in the field.

"This book by Stylianos Papathanassopoulos is a treasury of information and of carefully set out argument ... For students of the media system, it is invaluable and has no substitute." Times Higher Education Supplement

"European Television in the Digital Age provides a well-informed, well-researched and comprehensive overview of the issues and the dynamics that impact on European television systems at the beginning of the 21st Century. By charting the key moments in the development of the television industry in the last century, it provides a sound foundation for understanding the present state of the industry as it faces the challenge of digital television. This book will be essential reading for all those who want to better understand the recent past, the present and the prospects for the future of the television industry in Europe."
Ralph Negrine, Director, Centre for Mass Communication Research, University of Leicester

"Stylianos Papathanassopoulos has achieved the near-impossible feat of providing a survey and assessment of issues and developments in West European television that manages to be integrated, inclusive and detailed at the same time. It does justice to the considerable diversity of the European television scene, while highlighting shared circumstances and underlying dynamics. There is presently no more authoritative guide to this complex topic and unlikely to be one for the foreseeable future. It has a story to tell as well as a fund of information to offer."
Denis McQuail, Department of Politics, University of Southampton 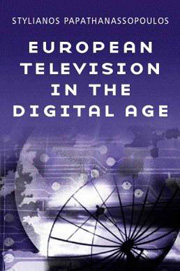