The media in the 21st century

We live in an era that the world becomes more complex, more complicated and even more controversial. At the same time, the media of communication occupy a dominant position in this world, and in most of the cases, overwhelm other sections of the society, which try to adjust themselves in the newer environment.

This book attempts to analyze current issues in the complex and multifaceted world of modern communication. The contributors of the book aim to discuss some of the topics related to the changes in the communication domain of the 21st century and to reflect on the debate as well as the concerns about the role of the media nowadays and more precisely in the fields of information, politics, journalism and the new media. 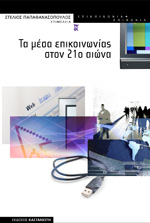