Stylianos Papathanassopoulos Professor of Media organization and policy at the Department of Communication and Media Studies - National and Kapodistrian University of Athens (UoA). He was the Head (2007-2011) of the Faculty, member of the Board of the Hellenic Audiovisual Institute (2006-20011) and is Visiting Professor at City University, London. Previously, he was Deputy Director (1996-2005) of the University Research Institute of Applied Communication (URIAC) and Deputy-Head of the Faculty of Communication and Media Studies (2003-2007). He has been Visiting Professor at the Technological University of Cyprus, and he has also taught at the University of Helsinki and the University of Sheffield. He is also a member of the Euromedia Research Group and was a member of the Network of European Political Communication Scholars (2008-2018) as well as he was a member of the research project "Changing Media-Changing Europe" funded by the European Science Foundation. He was a member of the Managing Committee of the COST Action "IS1308 -Populist Political Communication in Europe: Comprehending the Challenge of Mediated Political Populism for Democratic Politics" (2014-18). He also participates in the following EU projects: a) A response to online hate speech through the enhancement of high-quality professional and citizen journalism; b) Euromedia Ownership Monitor and c) European Media Platforms: Assessing Positive and Negative Externalities for European Culture.

He is currently Director of the postgraduate program in Journalism and New Media as well as Director of the Laboratory of Journalism Studies both at the Department of Communication and Media Studies - National and Kapodistrian University of Athens.

Zitimata Epikoinonias (Communication Issues)
Zitimata Epikoinonias (Communication Issues) is the only academic communication journal in Greece and provides a forum for the presentation of International and Greek research and discussion concerning the media, including the newer information and communication technologies, within their political, economic, cultural and historical contexts. It engages in critical discussions of any aspect of communication and the media: media history, globalization of communication, media institutions, media analysis, media criticism, media policy, new media, drawing on a wide range of disciplinary perspectives and on both theoretical and empirical research.

SMG/Media Analysis
SMG is a group of researchers in communication and media issues. It was formed by Professor Stylianos Papathanassopoulos in 2012 and it aims to conduct research in the field of communication and media studies. The research group SMG provides design, implementation and analysis on current affairs, and ad hoc basis for specific surveys. It also aims to complement its research activity with publishing. The webpage http://www.medianalysis.net is a part of SMG's activities. 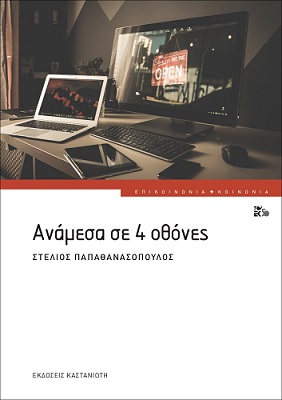 On any given day, the average citizen can choose between dozens of terrestrial or satellite or internet TV channels, radio stations, print or electronic newspapers and a host of websites. In practice, the media audience is becoming more and more fragmented, and the consumption of media content, whether informative or entertaining, is now in front of a screen, be it the traditional TV screen or the laptop or the tablet or the smart mobile. After all, in the history of communications, the same content could never be consumed by four different screens, and at the same time, inside the house or outside the house, constantly or on the move.

This book aims to highlight the key features of this new communication condition, as the consumption of modern media content is performed "among 4 screens".