Television in the 21st Century

This book describes and analyses the effects of the deregulation of the communication filed, and particularly the television landscape in Europe and in Greece. It traces the forces and the procedures that dominate the new audiovisual domain. It argues that the re-organization of the audiovisual landscape is part of a procedure that is related to the wider re-structuring of the communication systems and the dominance of neo-liberal ideologies, which favor the re-organization and modernization of the economy. It points out that the new technologies may have contributed to the implementation of this procedure, but they are not the main cause. Simply, the new technologies, such as digital television, have been used as means of pressure for a new deregulation in the television systems. It points out that although the major part of the television transmission remains analogue, digital broadcasting will become a reality in the near future not because it fulfils some needs and solves problems of the TV consumers, but because it consists of an imperative of the industry for the sales of new products and services.

While the forecasts for the public broadcasters are not sound, the book argues that the private TV companies have not brought new ideas in the field, apart from the commercialization and the devaluation of the quality. At the same time, private companies have not managed the TV field in a better and more effective way than their public counterparts. 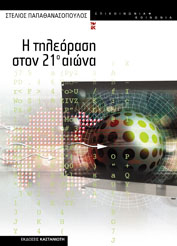